Nations rise and fall in history when they lose focus on what is strategically significant.  One person who understood this was the late Dr Verghese Kurien,  the genius behind the Amul story, the milk story, and the empowerment of common rural folk story.

This correspondent had the good fortune of meeting him during the late nineties.  During one of our discussions, over drinks in the evening, he suddenly remarked, “You know, India is destined to become the world’s biggest producer of milk, if the government does not mess things up.”  At that time, India ranked #4 in the world as a milk producer.

Kurien explained: “India has 800 million people (at that time). The first responsibility of any government is to feed its people. Since most Indians are consumers of grain, each kilo of grain results in 3-4 kg of chaff. Thus, India gets food for cattle on a marginal costing basis – almost free… Other countries must grow cattle feed. China could have enjoyed this advantage, but most Chinese cannot digest milk. Without domestic consumption of milk, growing a milk industry can be difficult.”

But, added Kurien, India would be able to enjoy this advantage only if the government did not throttle India’s advantage by allowing duty free or subsidised import of milk and milk products from other countries. Countries, Kurien emphasised, must protect their strategic advantage.

In 2001, India became – and still remains – the world’s largest milk producer with an output of 80.6 million tonne. Today, milk production in India is increasing at an annual growth rate of 4.5% compared to 1% for the world. It produces milk at 18 US cents a kilo compared to 28-35 cents for Europe and the US. With the reduction of subsidies under the WTO rules, milk from the US and Europe will become increasingly expensive. It can be advantage India. It could also become the world’s biggest supplier of milk and milk products, and could become the world supplier if government policies do not destroy this natural advantage.

But, as Kurien said, India’s ability to do this will depend on India’s policymakers.
Here are some suggestions:

(a) Do not allow duty free import of milk powder and casein, as was done two years ago, which later caused milk prices to collapse, thus hurting the farmer.

(b) Allow both cooperative and Indian private sectors to compete. Ever since Kurien stepped down, the latter has shown more growth.

(c) Promote transparency. NDDB (and all its subsidiaries) refuse to follow Kurien’s policy of making public its annual reports.

India can become the world’s supplier of milk – but only if its policy makers recognise the strategic advantage India enjoys. 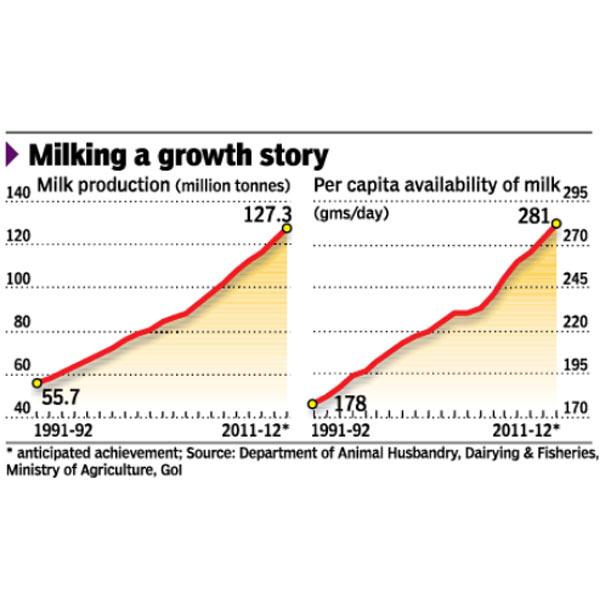