Govt control not the best way to manage temple trusts

Should a government be allowed to control the funds of any community? Community leaders have begun posing this question, as one temple trust after another has got ‘nationalised’ by state and central governments. 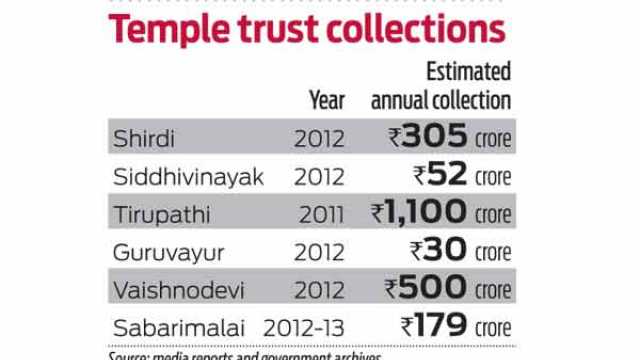 At stake are issues relating to ethicality, constitutionality and even sustainability of a harmonious society. It could lead to the emasculation of the majority community in India with dire consequences for others as well.

When India’s founding fathers wrote the Constitution, they were rightly concerned about the need to protect minorities – both linguistic and religious.

But nobody could have envisaged that, 69 years later, minority communities would emerge stronger than the majority, not because of any favours done to the minority, but because of the government’s erosion of the rights of the majority. Consequently, the entire social fabric has been weakened. And the well-being for both majority and minority communities has been jeopardised.

Sounds far-fetched?  Consider this. The only two religions that can boast of not having beggars on the streets of India are the Sikhs and the Parsis. One would have thought that the majority would take the lead, but it hasn’t.

Then, take the best of educational institutions. Outside IITs, the IIS and IIMs which are created under special Acts of Parliament – hence are relatively autonomous – the names that come to mind are St Xavier’s, St Stephens, CMC Vellore, Bombay Scottish, JB Petit, and Vachha Wadia. Not a single educational institution belongs to the majority community. The Banaras Hindu University and the educational institutions run by the Tirumala trusts around Tirupati have been allowed to decline in rankings.

Why? One answer is the majority community institutions have been left with little or no protection.  They are open to rapacious moves by the political class – irrespective of party. They have been thwarted in their efforts to develop their own standards of excellence and reinforce their respective value systems.

Take, for instance, the manner in which all cash-rich temple trusts in India are now controlled by the government (see table).  It started with the Tirumala Trusts when NT Rama Rao, the erstwhile chief minister of Andhra Pradesh, began eyeing the trust funds, and passed a law to control them primarily for financing his politically motivated largesse.

It wasn’t long before that all temple trusts belonging to the majority community were ‘nationalised’.  The strategy was invariably the same:  level charges of corruption; supersede the trust; appoint government nominees; and control the way ‘donations’ are spent.
The temptation to control these trusts is obvious.  There is both money and power — a heady combination.

This has serious implications. For instance, notwithstanding tax regulations which stipulate that 85% of the collections be spent on charity, the government of Maharashtra has informed the Siddhivinayak Trust not to spend over 15%. The Shirdi Trust has been asked to finance the building of an airport, a move that is being challenged in courts. And the cluster of colleges and schools around Tirupati that used to impart the best of education in the region, have now slipped into mediocrity.

When a community is prevented from using its religious funds to promote the values and institutions meant for the benefit of that community, it is deprived of the very means for rejuvenation. After all, politicians have a five-year vision, punctuated by elections.

So, here are a few guidelines for the government. If a trustee is corrupt, penalise him. But do not take over the trust. Communities, the world over, have a way of correcting themselves and promoting a vision that best suits them, subject to civil laws, of course.

After all, unlike politicians and bureaucrats, communities nurture vision that goes beyond a hundred years. Deprive a community from using its own money to benefit this vision and growth, and you will end up propelling it towards opportunistic demagogues and charlatans.  You will debase the community.  You will make it more rabid, more lumpen.  And you will end up making it a threat to other communities as well.

0
https://www.freepressjournal.in/analysis/chinas-investment-can-grow-further Don't underestimate China's savvy when investing in India RN Bhaskar - 19 March, 2020 Note from the author: This article has two parts to it. This...