Home Analysis Plenty of talk on solar power, but where are the policy underpinnings? A huge transformation of the power sector can be expected

Making declarations and signing MoUs is one thing. Getting capacity augmented, and making solar power relevant to India is quite another.

January was full of news on the energy front.  For instance, the World Future Energy Summit (WFES) was held in Abu Dhabi. 15-17 January. That was where the government of India announced the setting up of a whopping $350 million (around Rs.2.275 crore at Rs.65 to a US$) solar development fund to enable financing of solar projects in the country.

The announcement was made by Union Minister for Power and New & Renewable Energy, RK Singh at the International Solar Alliance (ISA) Forum, part of the WFES.  “India has one of the fastest growing renewable energy plans in the world and would achieve 175 GW target of installed renewable energy capacity well before 2020,”  declared Singh at the ISA. The Modi government had talked about 100 GW, and the current cumulative capacity of solar power installation in India is around 19.5 GW as of December 2017.

Before the Modi government came to power, India had an installed capacity of 2.5 GW of solar power.  This means that the present government has pushed through the installation of 17 GW of solar power during the past three years.  Achieving 175 GW will require some major policy decisions and some very bold steps.

During the session, YES Bank also committed to financing solar projects of over $5 billion. Both CLP and NTPC Limited announced they were forging partnership deals with the ISA and committed to make a voluntary contribution of $1 million each to the ISA fund corpus. IEA and GCF also announced entering into partnership with the ISA.

The interim director general of the ISA, Upendra Tripathy (formerly secretary renewable energy, ministry of power, government of India), said that under the ISA umbrella, over 100 projects will be signed by April 2018.

Making declarations and signing MoUs is one thing.  Getting capacity augmented, and making solar power relevant to India is quite another.  For instance, ever since Tripathy announced his ministry’s plans to push rooftop solar in February 2016, little sensible policy work has been undertaken either by the ISA or by the ministry.  Instead the ministry came out with a draft paper on rooftop solar on December 18, 2017.  The proposals called SRISTI – an acronym for Sustainable Rooftop Implementation for Solar Transfiguration of India  suggested absurd guidelines which will not allow solar rooftop power generation to take off in any meaningful way because they fail to address the issue of power subsidy and the need to bring in micro-grids or decentralised cluster power generation units. This author wrote about it in December 2017. 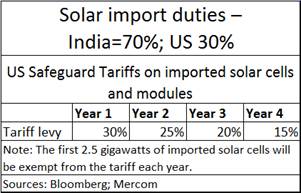 At the same time, there is a huge dichotomy between what the Prime Minister spoke of at the recently concluded Davos Summit and what the government’s solar power manadarins practice at home. Modi talked about the need to do away with protectionism.  Yet, his own ministry has been pushing for a 70% import duty on imported solar panels (it was subsequently stayed by the Madras High Court).  If this is not protectionism, maybe our mandarins will have to bring out a new dictionary.

Now compare the import duty rate imposed by India with that of the US which calls this levy a safeguard tariff on imported solar modules and cells. It starts at 30% in the first year, declines to 25% in the second, 20% in the third and ends at 15% in the fourth. Suddenly, the US method of protectionism looks a great deal more reasonable than the Indian government’s espousal of free trade. There is no attempt to introduce a reasonable import duty, and some tapering off aimed at making the domestic industry that much more competitive.

In fact there are good reasons why the power ministry should work on a refurbished power policy on a war footing.

First, the railways has announced an ambitious plan to convert all its engines to run on electricity rather than coal and diesel.  At least some of that power will come through solar power – because the railways itself owns huge tracts of land and rooftops which can be intelligently used to generate solar power throughout the year. 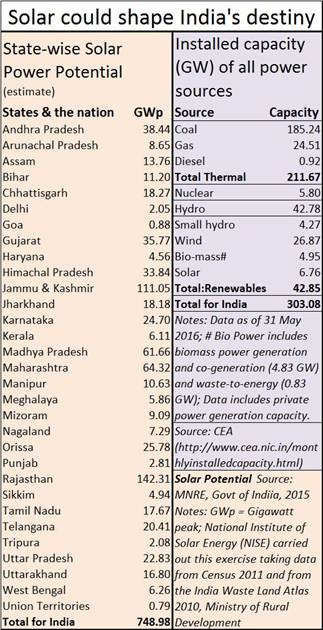 Third, the solar power capacities announced desperately require norms for promoting rooftop solar, and the manner in which rural electrification will henceforth involve micro-grids.  The power ministry will also have to work out with power distributors the manner in which micro grids with smart-grid technologies can be introduced.  There has apparently been no meeting as yet to work on such policies.

Fourth, there are reports (‘Parched Power: Water Demands, Risks, and Opportunities for India’s Power Sector’ by the World Resources Institute) which point out that at least 40% of India’s thermal power plants had to shut down because of freshwater shortage or scarcity. More power plants – all in water stressed areas – could be expected to shut down in the coming years. As the report puts it, “Fourteen of India’s 20 largest thermal utilities experienced at least one shutdown due to water shortages between 2013-2016, costing the companies $1.4 billion,” Solar could provide the alternative solution.

Finally, there is no denying that solar is a gift horse that India has been looking at in the mouth for long. India has a potential for producing 748 GW of solar power.  It has set up capacities for just 19.5GW.  It has a 100 GW target announced by the prime minister, and a recently announced target of 175GW. The total capacity for India is just 303GW inclusive of thermal, hydro, nuclear and other forms (see chart).  Obviously, the need for a policy rethink is urgent.

The three ministries will have to decide whether they will adopt the charging points route or the battery swapping route.  The first will allow car owners to charge their cars at parking lots and at homes. That will mean augmenting solar panel charging capacities at homes and at parking lots to ensure that the current grid is not overburdened.   The other alternative is the battery swapping route (recommended by Shai Agassi and Shimon Peres in Israel in 2012).

This model works on the same premise that hydro-carbon fuelled cars use today.  When you buy a car today, said Agassi in 2011, you don’t buy an oil refinery, do you?  You just purchase the amount of gas required to make the car move and reach a destination. The same way, people must be allowed to surrender a depleted battery and pick up a new one, with net tariffs being paid by consumers (energy surrendered with the old battery deducted from the total energy supplied with the new battery). Thus existing fuel stations will be encouraged to become battery swapping stations where old batteries are dropped off, and new ones picked up.

The entire costing includes recharging, battery lease, transportation, interest on inventories and insurance.  Charging of the batteries could then be centralised, and done through solar power and/or grid power.  That would bring down the price of the car (and recharging) by more than a half.

To help existing petrol pumps transition towards becoming battery stations will require the help of the MoPNG.  It will – along with the other two ministries – try find out if the range of batteries can be streamlined, and only a fixed number of automobile batteries are used to reduce inventory and replacement costs. And the power ministry could lay down norms for using these fuel stations as energy dumps from where it can draw power during peak load times.  That would reduce the need to set up peaking power stations.

Clearly, making declarations of capacity, and coming out with half-baked concept notes, is not enough.  India needs to be more cogent about policy making.  It needs to synchronise its efforts towards making the transition towards solar as painless as possible even though the disruption will be massive with major implications across sectors.

India, China and the Brahmaputra